It’s possible that an ad-blocker is interfering with the video player. Disable the ad-blocker and try again. If issues persist, please see the additional troubleshooting steps below.

This generally occurs when the live stream venue is having internet connectivity issues. Try refreshing the page in a few minutes to see if these issues have been resolved.

There could be a number of causes resulting in slow or interrupted video playback. In general, if you’re connecting over Wi-Fi and experiencing constant rebuffering or other issues during playback, try moving your router to another location and away from other devices that may cause electrical interference.

We recommend the following:

Are Improv Comedians and Spontaneous Singer-Songwriters Think: Reggie Watts, Flight of the Conchords, Tenacious D & the Smothers Brothers David Milchard and Ken Lawson are award winning improvisers, musicians and actors who love making up songs based on your suggestions! David and Ken have toured across North America, Australia and The Caribbean. They’ve also performed at comedy festivals such as: Just For Laughs, BumberShoot, Adelaide/Australia Fringe, Edmonton’s Improvaganza, The Chicago, Seattle, Miami and San Francisco Improv festivals. They’ve performed many times with Improv Legends Colin Mochrie and Ryan Stiles, from Whose Line is it Anyway fame. David and Ken are: Members of the Internationally acclaimed Comic Strippers Canadian Comedy Award Winners Canadian Comedy Award Multi-Nominees Second City and Vancouver TheatreSports Alumni You may have seen them in these TV Shows & Movies: Altered Carbon, Supernatural, Flash, Hater’s Back Off, You Tube’s Convos With My 2-Year-Old (125+ million views) LouderMilk, iZombie, Adventures In Babysitting, Psych, Fringe, Sanctuary, Smallville, Arrow, Tim Burton’s Big Eyes, Robert Redford’s The Company You Keep and The Package. 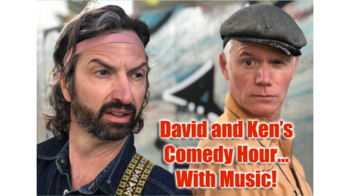